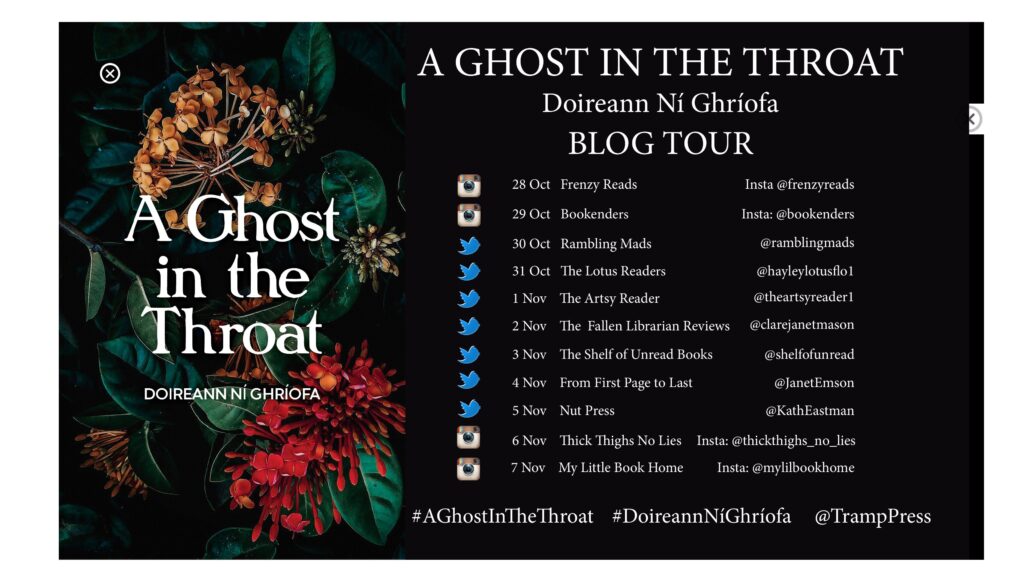 I don’t think I’ve ever been more intrigued by a book’s title as much as this one, and at the same time so in love with the cover at first glance. When the writing itself then also fascinates me this much, I know I have to write about it here. Please keep on reading to find out what A Ghost in the Throat is all about, and what I thought of it!

‘When we first met, I was a child, and she had been dead for centuries’

In the 1700s an Irish noblewoman, on discovering that her husband has been murdered, drinks handfuls of his blood and composes an extraordinary poem. Eibhlín Dubh Ní Chonaill’s Caoineadh Airt Uí Laoghaire was famously referred to by Peter Levi, then Professor of Poetry at OxfordUniversity, as the ‘greatest poem written in these islands in the whole eighteenth century.’ In the present day, a young mother narrowly avoids tragedy. On encountering the poem, she becomes obsessed with its echoes in her own life and sets out to track down the rest of the poet’s story. Culminating in Doireann Ní Ghríofa’s own translation of the poem, A Ghost in the Throat is a devastating and timeless tale about one woman freeing her voice by reaching into the past to hear another’s.

This is a female text, written in the twenty-first century. How late it is. How much has changed. How little.

This is a female text, which is also a caoineadh: a dirge and a drudge-song, an anthem of praise, a chant and a keen, a lament and an echo, a chorus and a hymn.

This book is very much an original masterpiece. There were so many parts I wanted to quote, so many lines I wanted to copy into my review for you to see, but I will leave it at the above section. The prose is so rich and enchanting, and very truly unique.

What we get is not just a love story, or a dramatic play, or a collection of poems, it is all that and so much more. It is also a biography, a scholarly essay, a novel. And even all these categories probably don’t do the book justice. You’ll just have to read it and see for yourself.

This award-winning book shows how much research the author has done on 18th-century Eibhlín Dubh Ní Chonaill, who wrote a special poem that has been haunting her ever since: Caoineadh Airt Uí Laoghaire.

What I found most intriguing was the narrator’s (she shared the author’s name, so I was taking it pretty much as one and the same person, even though you should usually not do that) blending of her historical findings and the account of her domestic life. We read about her everyday tasks, the importance her being a mother has but also the very trivial tasks that are to it, but the author’s voice has such a lyrical note to it that even reading about her school run or house work sounds like a special quest.

I loved reading the poem that fascinated her so much – the translation from Gaelic to English was helpful, but I was glad that the Gaelic was still left in the book. It gave the writing another layer of depth (even though I didn’t know the words). What a beautiful language!

Most of the first part of the book, the narrator chases the historical figure in question down to her roots, and blends her findings with her own life experiences. This recount was absolutely fascinating and absorbing. However, the second half seemed to lose its focus a little bit.

Nonetheless, this mixture of slightly gothic style, the historical aspects and uncoverings of a female Irish poet from the past, the lyrical writing, all the academic research that must have gone into this composition, as well as the abundantly rich and poetic language together with the praise for women, femininity, motherhood and womanhood make this read more than special and worthwhile.

Thank you all so much for reading, and do let me know if you pick up this book!

P.S. Big thank you to Helen from Helen Richardson PR for my copy of the book, which I received in exchange for my honest review.

DOIREANN NÍGHRÍOFA is a bilingual writer whose books explore birth, death, desire, and domesticity. Doireann’s awards include a Lannan Literary Fellowship, a Seamus Heaney Fellowship, the Ostana Prize and the Rooney Prize for Irish Literature. She is a member of Aosdána. A Ghost in the Throat is her prose debut.

Brilliantly written, and so unique!

View all posts by Noly

Do you love books, quotes, diys and being creative? Then you have found yourself a new friend! Please feel free to have a look around, leave a message or simply read up on my latest book experience.

Hola! I’m Noly, in my mid-twenties and I LOVE books! That’s all you need to know (joking:D Or am I?)

Have fun on my site!